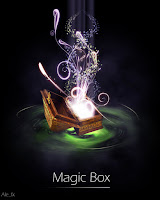 
The night was as calm as a sea before a storm. Not a whisper of the winds or chips of the crickets.Just a faint howl of the owl . I tiptoed past the grandma's room , to the main hall and down in the corridor that lead to the store room. Long Dark corridor Stood gloomily in front of me .

I always felt there was so much going on in that house at night time as much as in day time. I think this was the effect of her bedtime's stories of fairies and goblins and knight in shining armor which she would affectionately tell us when we were little. It was not really her fantasy stories but the conviction with which she used to tell us those. I and my brother would often search for a Thumbelina or a red riding hood out in the woods actually believing they are there somewhere. I remember one particular day in the house , when I was just 8 years old, running in corridors with my brother and came across this trunk in the store room which she called pandora box. We started to explore through it and came upon a bright Royal Deep Blue Diary. It was soft to the touch , embedded with grandma's name at the bottom. But before we could open it, Grandma snatched it from our hands and dragged us outside pulling our ear, giving us a big lecture on something she called as an invasion of privacy.


But the only thing I remembered in that whole incident was The Royal Deep blue diary of my grandma.Private things always intrigued me. And today again, after so many years, I embarked upon the same adventure for the search of that diary.


Excitement took over the guilt within me. My sixth sense was on guard as I walked towards the dusty store room. I pushed open the rusted forbidden door latching it from behind and begun my exploration. Flashlight from the cell phone traced walls in the room illuminating old memories of my childhood. My First bicycle, my old drawing book, my first birthday greeting card to grandma, all were now safely placed in cold and dark store room. Light flashed over to the old rusted trunk in the corner.


Eureka!! The legendary Trunk of Grandma. I dusted the top of the trunk as the golden caption appeared from within.


As I touched it, I felt strange. Like trunk had its own identity and was waiting to be explored. For years, we were forbidden to open this trunk let alone touch her diary in it ,but right now I was touching it with my bare hands and it felt like it had not aged a bit since last time I saw it. The trunk opened with a crack echoing in the room, as I wiggled the lock. I took out the royal blue diary from the trunk and neatly placed it on the floor.


A smile flashed on my face. At last, I had the possession of my granny's diary. As I opened the diary my inner caution kicked in with its virtuous stand.


Now now ...don't give me that guilt thing. I spoke to my inner Self. I'm already having the worst day of my life here. Screwed up my exams big time, Broke up with my boyfriend, burned my two favorite dresses which is not funny at all, And as if that is not enough, got dragged to granny's house just before my 15th birthday.Life is anyway killing me and I'm gonna read this diary before I die. So guilt just shut up......


There ! Almost convinced my inner conscious


I took a deep breath and opened the Diary Pages which were little more pale of a yellow since I last saw it.


hmm, now what shall I read ? I flipped through the pages as my eyes fell on something very interesting.


This is going to be best birthday present ever.! I exclaimed with childlike excitement, as torch light started to scan the rotten pages of hidden secret carrying me away into a different era