Sneak-peek into the Book- "It's All About The Click!" 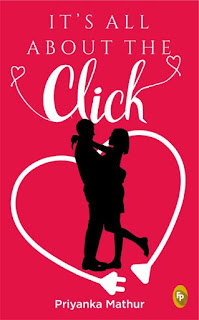 So while we wait for the book to hit the market, here is a quick sneak-peek into it. Enjoy!!


Turned 24 and haven’t yet fallen in love?
Trying to get acquainted with the world of matrimonial websites
and lost between numbers and labels?
Well, it’s time to press ‘Enter’!


This is the story of Mitali, but essentially the story of almost every Indian woman who has reached the ‘marriageable’ age but hasn’t settled down for various reasons and has hence come under the scrutiny of the society by default. No matter how modern and developed we might have become, some things just never change.
Amusing and fun, Mitali’s story takes you through some crazy situations. From rapid-fire interviews with maternal uncles for their ‘USA-based’ nephew to hilarious meetings where she is taught to make poha for the darling son. Mitali seems to be doing it all to find her perfect match.
As she ticks off the boxes while looking for that ‘click’, will she find her true love?